A state representative has a personal reason to renew the effort to make Missouri the last state to adopt a prescription drug monitoring program. But she will still have to overcome a big obstacle.

Every other state has the system that lets doctors and pharmacies know if someone is getting or filling multiple prescriptions for pain killing drugs.   Supporters of the program say Missouri needs the database  that limits so=called doctor-shopping and minimizes the supply of prescription pain-killers that are being sold on the streets.

State Representative Holly Rehder of Sikeston has a personal reason for trying again. It began when her 17-year old daughter cut her finger at work and got a painkiller prescription.  She began buying the drug on the street when she finished the supply she got at a hospital.   “We’ve been twelve years down the road of ups and downs in rehab,” she says.  But Rehder said her daughter has been “clean” for the last six months.

The House has approved the program but the bill has run into St. Joseph Senator Rob Schaaf and a few allies who have blocked it. Schaaf claims the database cannot be sure, a claim that Rehder says it not supported by the experience in other states.  He wants a statewide vote, which Rehder says is just a stalling tactic, and a limit on the amount of time the information can be stored, which Rehder says is worth discussing although she thinks Schaaf’s demand for a six-month limit is not realistic. 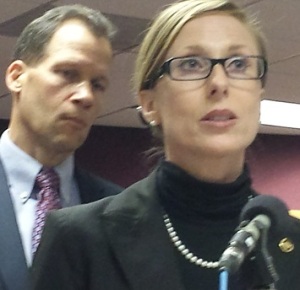